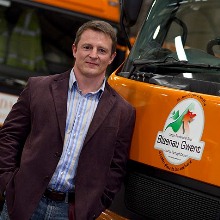 Recently we brought to you the story of Dr Paul Thomas' work with Blaenau Gwent CBC Environmental Services. Here we give you another chance to watch the BBC programme and also a brief update on what happened afterwards.

In 2008, colleague Dr Paul Thomas started working within Blaenau Gwent County Borough Council and was filmed by the BBC. This resulted in the BBC programme 'Ban The Boss' which can be viewed by clicking here.

The programme follows Paul as he applies Complexity Theory whilst working  with the Environmental Services Department (Highways, Refuse and Recycling, Litter-picking, and Street Cleansing).

The bin-men viewed management, 'innovations', 'new ideas' and cost-cutting, job losses and more-work-for-less with great suspicion and didn't trust anyone (even the BBC film crew). With change comes risk and uncertainty and the biggest challenge was the acceptance that uncertainty is a natural part of the process. For example, inspiring frontline staff to choose their staff uniforms, arrange shift-patterns, or order equipment, gradually increasing responsibility.

So what happened? The Bin-men were released from filling in a number of forms before they left each morning, this was replaced by a simple checklist. Environmental Services has no managers at all, just leaders. Apart from one manager who chose to leave, no staff were forced out of the organisation. They were moved to other areas where their talents were better utilised. Staff were encouraged to provide input into routing, rostering and how to increase the amount of recycling within the Borough.

The money saved by this intervention, estimated to be in excess of £1m is being re invested  in frontline services, decided by the staff themselves. They were also recognised as the best refuse collection service in the UK, not missing a single collection in the 3 months of the snow disruption. Anyone who knows the steep valley roads will realise that this was no mean feat. Oxford in comparison, a fairly flat region, lost 6 weeks in collections. Recycling rates are also soaring thanks to the hard work of the staff in educating residents and school children. The mechanics in the workshop are also happier and generating revenue for the council by working on, and MOTing vehicles from outside the Council.

As part of this project staff were asked a number of questions, the answers speak for themselves:

Great update Derek. Thank you. Let me know if I can help in any way.

It's my shout for coffee next for sure ;-)